The Work In India Begins

Postpartum hemorrhage is still the major maternal killer in India.

Most of the time the mother cannot be saved because of the various delays in seeking the appropriate healthcare. In spite of many government programs, training and workshops the problem still exists.

The project “Management of PPH using Bundle approach, a comprehensive approach using non-clinical and clinical components together with special reference to ESM UBT and NASG,” was planned in 11 medical colleges all over India from Maharashtra and Madhya Pradesh. The project was planned and drafted in collaboration with MGH, Harvard under the leadership of Dr. Thomas Burke, the Chief of Global Health Division. MGIMS Ethical committee approval was taken. Then permission was obtained from the Government of Maharashtra and the project was implemented in all the sites. 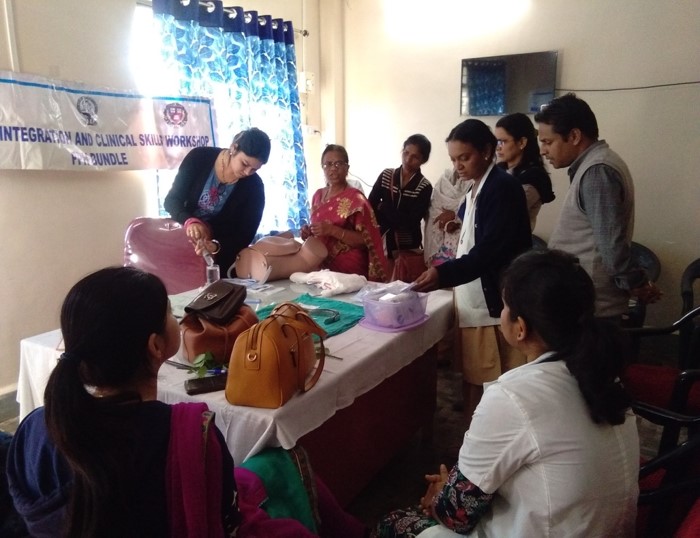 The project was planned in two phases. Phase one used a clinical component with special reference to see the acceptability, efficacy, and feasibility of the Every Second Matters – Uterine Balloon Tamponade (ESM-UBT). Phase two was implementing the non-clinical component and seeing its impact.

In phase one, all principal investigators were trained in MGIMS Sevagram with MGH trainers on the clinical components and the skills needed for implementation of the clinical bundle. These master trainers then developed their own team and trained them in a similar way. Each one implemented a full clinical component of the bundle at their own settings in different facilities selected by them. The non-pneumatic shock garment (NASG) was added in the bundle 7 months later.

In phase two, the medical colleges took up one component of a non-clinical component of the bundle. The components chosen were: system integration, facility readiness, team approach, emergency response team configuration, quality improvement, advocacy, and branding.

The Wardha District with two medical colleges and district hospitals took up the system integration, which of course had a subcomponent of facility readiness and team approach in emergency situations. The district has the following geography (see below) and the district authorities gave immense cooperation to implement this project at all health facilities.

The official orders were placed for the training of these facilities and their follow-ups by district authorities and the program was planned. 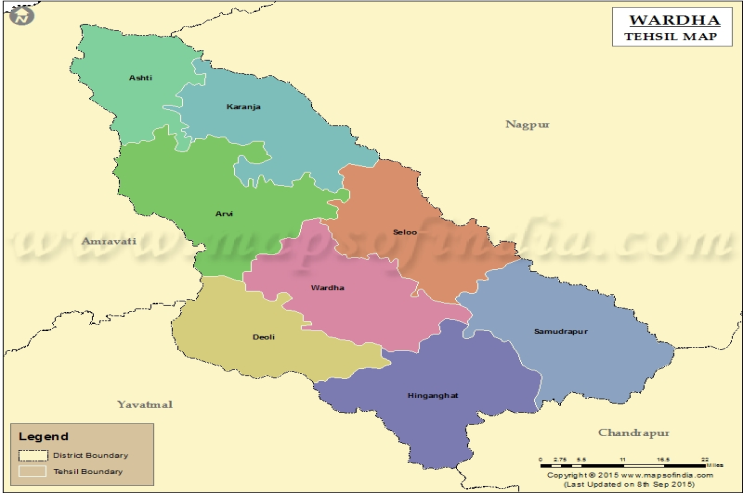 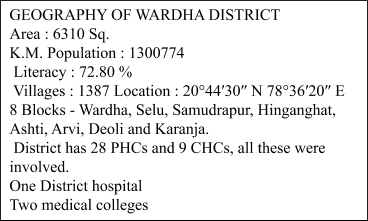 The components of the bundle were implemented in these health facilities up to PHCs with a structured plan. The bundle approach, with its technical and nontechnical components, was developed as a package. The first workshop was conducted in the Department of OBGY at MGIMS Sevagram, Wardha.

The additional 10 medical colleges were there along with their colleagues and nearly 28 obstetricians attended the training on January 10th, 2017. The project started by following a comprehensive clinical approach for the management of PPH and use ESM-UBT for seeing its efficacy, feasibility, and acceptability.

Seven months later, a component of NASG was added and a refractory response for management of PPH,  which did not respond to preliminary treatment, was planned. In Sep 2017 the bundle approach was implemented once all the PIs were well-versed with the clinical protocol and retraining were done using lectures, skill stations, videos and focus group discussions. Several follow up meetings were done and the PIs presented their learning in the form of benefits and challenges. Based on that the project was modified and re-implemented.

Follow up meetings with MGH team were held on:

The Wardha district took over the clinical and non-clinical components of system integration for the management of PPH using the bundle approach and to see its impact over the PPH death, case fatality, MNM, and MDR. 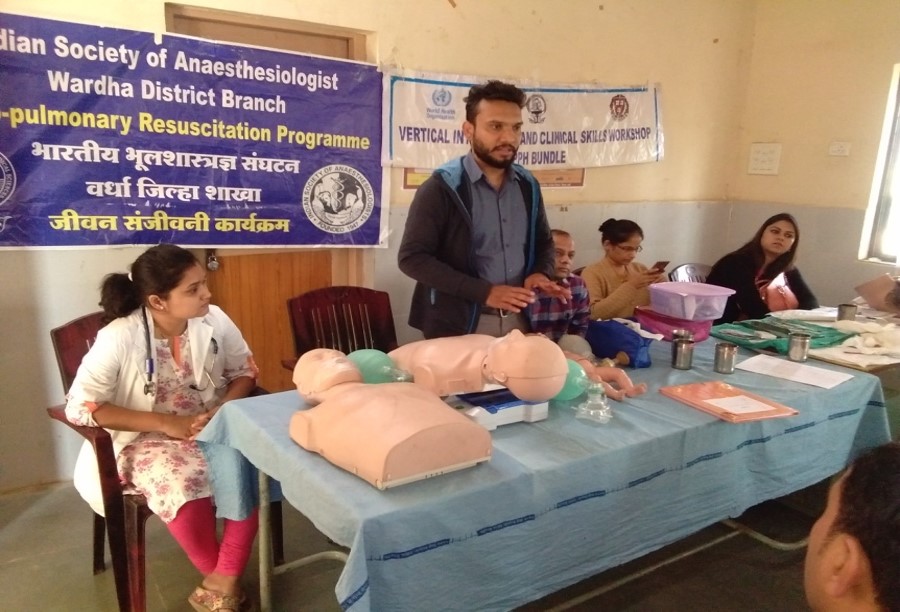 After many verbal autopsies, it was observed that in many cases — particularly from distant rural areas — it is the time which is crucial in the management of PPH.

The women do not reach facilities on time, there is no communication, and the facilities are not ready for critical care management. To address these issues, team leaders took up a project in association with MGH, Harvard University with Dr. Thomas Burke, Chief of Global Health and Human Rights, MGH, Harvard, USA as principal investigator.

11 medical colleges over Maharashtra and Madhya Pradesh were selected who gave their commitment to the study. Evidence-based protocols were used as recommended by the Government of India (GOI) and the Federation of Obstetric and Gynaecological Societies of India (FOGSI). Tranexamic acid (TXA) was given once or twice to all PPH women. The ESM-UBT was inserted in all women with refractory PPH and it was noted that insertion of ESM-UBT did change the scenario. A number of women with grade 3 and 4 shock could be saved. During the process, it was realized that delayed referrals with no appropriate referral protocols and facility readiness were the main issues for PPH deaths.

After mapping the Wardha district, it was realized that there was a great need for vertical integration. The vertical integration project was taken up by the department of OBGYN, MGIMS Sevagram and JNMC Sawangi for training all the facilities in the management of PPH using the universal protocol. Eventually, in the catchment areas of the 11 medical colleges, 23 PHCs and 21 CHCs were covered by this PPH effort in addition to all the facilities in the original Wardha district.

The approach used was for PPH, which is a national public health issue and a top priority in Maternal Health. The nation aims at zero preventable deaths and PPH management using bundle can help us reach the national goal. 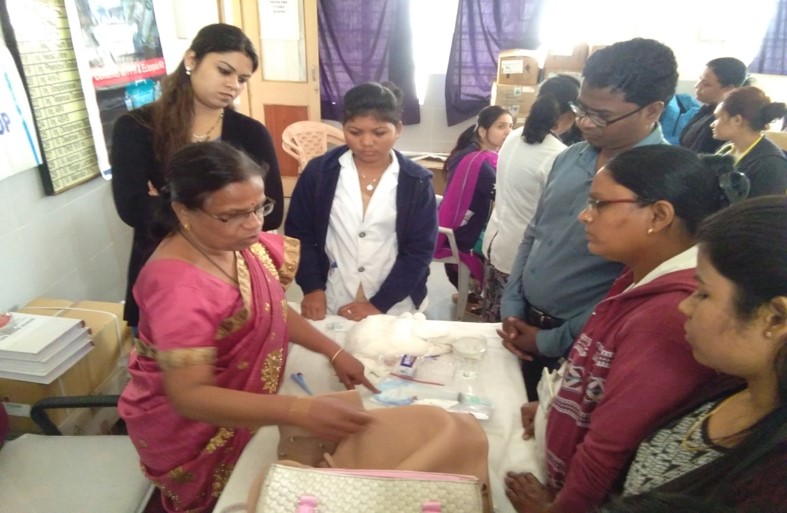 The National Health System Behind The Work

There are GOI and FOGSI guidelines for the comprehensive management of PPH. We modified it and implemented that with GOI permission. The results were communicated to the central government and the project was put under the national portal of innovation and in 11 countries partner’s forum. HLL, a GOI company, was asked to make the ESM-UBT kits. 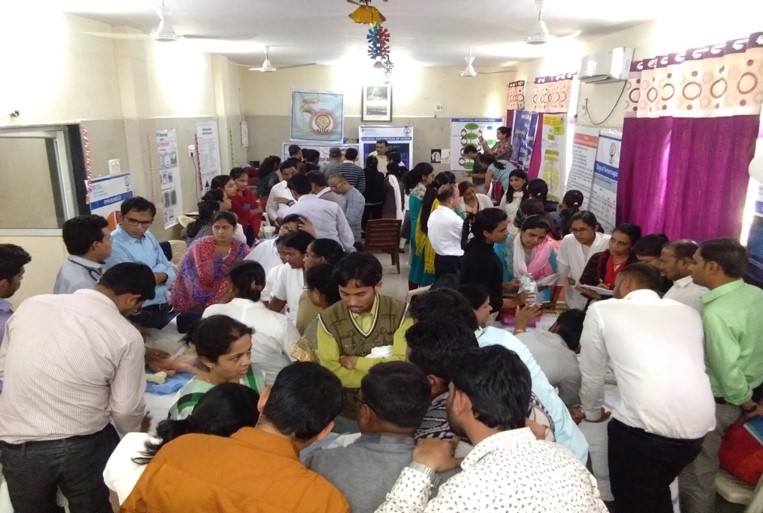 The results of the bundled approach showed great improvement in the medical care given to women experiencing PPH. Here are some of the key takeaways:

In conclusion, the PPH Bundle Card is the best approach for the clinical management of PPH. In addition to the bundle, some important non-clinical components which can reduce PPH morbidity include strong system integration, facility readiness, cohesive team approach, and emergency response team configuration. Effective training of faculty and staff on the newer modalities of PPH treatment are additional keys to success.