Hellen Achieng was waiting to be served breakfast at 8.00 a.m. on a Sunday morning in the post-delivery ward when she felt sudden pain in her abdomen, she looked down and her cloth was soaked in blood. A nurse had just walked in to check on her and her 9th baby, who was delivered that morning.

She told the nurse she was not feeling well but when she tried to reposition herself on the bed she felt more blood gushing out. “It was like someone had poured blood with a basin on my bed,” Hellen described the scene. “I felt dizzy and thought I was dying. I screamed as the nurse looked at me shock written all over her face” she says.

The nurse shouted for help, and the team rushed Hellen back to the delivery room where she says, they gave her an injection of oxytocin. Hellen continued to lose blood.

“I kept thinking of my new born and my other eight children-wondering how they would survive without their mother,” she recalls.

Moments before Hellen passed out, she remembers seeing two healthcare providers using something like ‘trust’ (a common condom brand in Kenya)  which they inserted in her uterus using a small pipe. The providers had used the ESM-UBT to stop the uncontrollable bleeding that Hellen was experiencing after giving birth.

“I had died thrice. I would wake up and get unconscious again, my sister in law who was at the hospital told me later,” recounts Hellen who gained consciousness at St. Camilla, a private Mission Hospital where she had been referred to for blood transfusion after the providers in Sori Health Centre successfully arrested the hemorrhage. 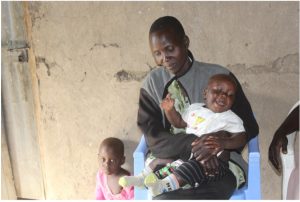