Postpartum hemorrhage (PPH) is the leading cause of maternal death globally.

As per the WHO estimates , every year more than 14 million cases of obstetric hemorrhage occur, resulting in an estimated 127,000 deaths translating to 26 women every minute. Even though the major contribution  of these deaths come from developing countries, but in middle income and high income countries also, it is a great challenge.

As far as maternal deaths are concerned, PPH is the leading cause specially in low income countries and is the primary cause of approximately one-quarter of global maternal deaths. As per the document by WHO 2013, the vast majority of these deaths occur in low and middle-income countries (LMICs) yet, recent studies have shown increasing incidence of PPH in developed countries as well.

Many mothers in low-income countries have home deliveries managed by unskilled providers. Their belief in untrained people, rather than going to the health facility, often leads to difficulties during childbirth.

Even if mothers do decide to go to a healthcare facility, many of them are understaffed, or do not have the necessary commodities, consumables and equipments.

Health facilities across low-income countries often struggle to adequately train their staffs for complications across the medical spectrum -- with childbirth being one of the most common.

A culmination of the understaffing and undertraining issues, wherein many health facilities simply do not have the safety net in place -- both before postpartum hemorrhaging begins, or after -- to serve the needs of the mother in the moment.

Postpartum hemorrhage (PPH), is unpredictable, it not only occurs in high risk pregnancy but in many cases, it happen is low risk pregnancy too where it was never expected. 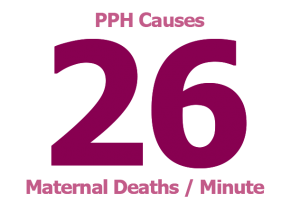 PPH not only causes maternal deaths but more than that it causes severe morbidities in the survivors. Among PPH survivors, it was estimated that 12% will suffer from the consequences of severe anemia. Sometimes it may end up in blood transfusions and these transfusions occasionally become lethal due to transfusion reactions  — and so the endless issues continue.

How Do We Act To Achieve This Goal?

The prevention and management of PPH is a joint responsibility of key health administrators at national, state, district and facility levels along with clinical and paraclinical health staff. The policies based on evidences are developed by administrators in the form of guidelines and are to be implemented by the state and district administration in the various health facilities.

To achieve no PPH deaths or at least a significant reduction in maternal deaths, it is important to have vivid guidelines which consider both non-clinical and clinical aspects in the management of PPH. These two aspects are intermingled as missing or neither of them will never work well. The story of PPH commences with unawareness, unwillingness, non-availability, untimely approach, unskilled personnels and so on and so forth…..and ends in the severe complications and /or fatality.