In the past 20 years, a set of cost-effective interventions, suitable for implementation at both health center and hospital level, have been developed. Some of these can also be used in the community or at home. We thus have another set of tools to control moderate and severe postpartum hemorrhaging (PPH).  The use of these tools is also increasingly being combined in a standardized and simplified approach, summarized in the last bullet below.

The World Health Organization (WHO) hosted an expert consultation on PPH bundles in December 2017, where a consensus was found that every port partum hemorrhage should be treated rapidly by four interventions: uterine massage, uterotonics, IV fluids (crystalloids) and tranexamic acid. For PPH that is refractory to these four interventions, these interventions should also include aorta compression, bimanual uterine compression, uterine balloon tamponade (UBT), and apply NASG.

Misoprostol is a fairly new drug, that among other uses also is an effective uterotonic.

Misoprostol tablets have been shown to be effective for routine use at home, to be taken by the new mother herself. As they are handed out at ANC visits in the last trimester, the pregnant woman is advised to take them after giving birth at home if she cannot make it to the facility in time.

She is advised to either take them immediately after the birth of the placenta, or take them in case of big bleeding after birth.

The NASG is a garment made of neoprene that is strapped to the legs and lower abdomen, tightened by Velcro strips, and is used in the treatment of shock and bleeding. 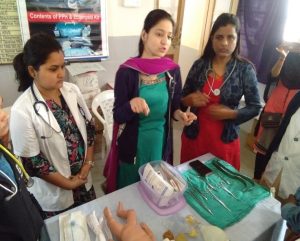 Numerous studies have shown it to be effective in saving mothers’ lives by treating severe PPH. Longcase series show that of women with severe PPH, 80-90% of women will be saved by correct use of the NASG. The garment can be ordered for around 40 USD (for instance from Maternova), and it has a lifespan of over 10 years in which it can be used over a hundred times.

Heat-stable carbetocin is an injectable drug that can replace oxytocin for prevention of PPH. It is thus used for AMTSL (active management of the third stage of labor), and it is thus being introduced in some countries to be used routinely at all births. The price is going to be the same as the price of oxytocin. This will avoid the problem of only having oxytocin of varying quality for AMTSL, and often also ineffective by not having been stored in a cold chain.

Tranexamic acid (TXA) is a drug that helps the blood coagulate faster by inhibiting the normal clot dissolution mechanism in the body. We know that when given via IV to women with PPH, as soon as possible after the diagnosis of big bleeding, maternal mortality is 30% lower than if no TXA is given. No side reactions have been reported from major studies. It is essential that this fairly cheap drug be made routinely available at all health facilities in the world where babies are born.

The intrauterine balloon tamponade was invented in the 1980s, and many devices have since been suggested and produced – from pricey, disposable devices used in high-income countries, to condom catheters improvised locally. Today, two prepackaged and disposable low-cost devices have been developed, extensively tested, and certified. 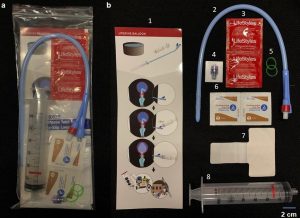 One is the Ellavi device produced by Sinapi, with a cost around 10-12 USD, and the other is the Uterine Balloon Tamponade (-UBT) with a price of around 3 USD. The Sinapi device is industrially made, while the UBT is assembled from existing components. Extensive studies of the UBT shows that it can save over 95% of PPH mothers who are in shock.

External aortic compression is an emergency maneuver proposed to reduce postpartum hemorrhage and permit time for resuscitation and control of bleeding.

Although aortic compression generally is not taught to obstetricians as a maneuver to control major pelvic hemorrhage, anesthesiologists are aware of its value and may ask you to initiate this maneuver in the setting of severe postpartum hemorrhage.

It is recommended that external aortic compression be considered in severe life-threatening postpartum hemorrhage, particularly during stabilization or transport of the patient. This simple maneuver may be used as an adjunct to other measures and could prove of benefit, especially in locations or situations where advanced medical assistance is geographically or temporally removed.

Uterine compression sutures are a medical procedure used to assist in the treatment of PPH, and specifically with the goal of avoiding a hysterectomy, which can be a last-resort treatment for PPH.

Compression sutures have been reported as an effective method in treating PPH and thus avoiding hysterectomy. However, the reported experience with this method is limited.

Ligation of the IIA has a proven success rate in controlling massive pelvic hemorrhage, varying between 40% and 100%, and obstetric pathologies occupy the first place as the leading factor.

The risk of operative injury beyond success is the major gap beneath the feasibility of the procedure. A detailed knowledge of anatomy is required along with good exposure to achieve the procedure with the maneuver of traction and counter-traction. Bilateral ligation of the IIA is better to control the total blood flow in the pelvis and the surgeon would prefer to change the operative side for a comfortable surgical practice.