Save Mothers > Reducing PPH > Scientific rec. by WHO & FIGO

Scientific rec. by WHO & FIGO

Postpartum Hemorrhage (PPH) is the leading cause of maternal mortality in low-income countries.

The most common cause of PPH is poor contraction of the uterus (uterine atony). Primary PPH is often defined as the loss of more than 500 ml of blood within the first 24 hours following vaginal childbirth, and more than 1,000 ml following C-section. Secondary postpartum bleeding is that which occurs after the first day and up to six weeks after childbirth.

An anemic pregnant woman has less safety margin at the time of birth.

If the anemia is severe, even a bleeding of less than 500 cc can have a fatal outcome. Detecting moderate and severe anemia during pregnancy is important both to treat and follow up the anemia during the remainder of pregnancy, and also to discuss with the anemic woman where it is best for her to give birth. A higher level facility should be able to monitor for, prevent, and treat PPH better than a more resource strapped one. 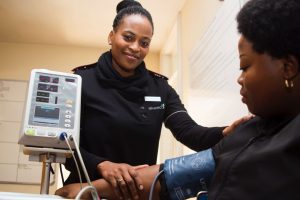 Most cases of PPH are impossible to predict, but some factors do raise the risk of dangerous PPH. Apart from anemia, a very big fetus, twins or triplets, hydramniosis (very much amniotic fluid), previous PPH, and any bleeding in the last trimester of pregnancy are risk factors for PPH in the current pregnancy. It is important that community leaders, village health volunteers, families and pregnant women themselves are aware of these risk factors, so that proper planning for the best birthing care can be done.

Active Management of the Third Stage Of Labor (AMSTL)

AMTSL as a prophylactic intervention composed of three steps: 1) administration of a uterotonic, preferably oxytocin, immediately after birth of the baby; 2) controlled cord traction (CCT) to deliver the placenta; 3) massage of the uterine fundus after the placenta is delivered.

In 2012, the results of a large World Health Organization (WHO)-directed, multi-centered clinical trial were published and showed that the most important AMTSL component was the administration of a uterotonic.

The  WHO trial also demonstrated that the addition of CCT did almost nothing to reduce hemorrhage. The women who received CCT bled 10 mL less (on average) than women who delivered their placenta by their own effort. There was a real difference, however, in terms of the length of the third stage: the third stage was an average of six minutes longer among those women who did not receive CCT. The authors acknowledged that this can be an important amount of time, not so much for the woman, but for the management of busy labour and delivery units.

WHO’s newest recommendations clarify that although administration of a uterotonic remains central to the implementation of AMTSL, the performance of CCT and immediate fundal massage are optional components.

First, it is important to avoid unnecessary use of uterotonics before the baby is born. This includes unnecessary induction (initiating labor) and augmentation (strengthening labor).

While AMTSL should be routine for all mothers, the overuse of uterotonics during labor tends to increase the risk of PPH. If the uterus has been “treated” with uterotonics for hours before birth it may well be “tired” when the baby is born and fail to contract properly – PPH occurs. This is probably receptor-mediated.

Therefore, overuse of uterotonics both for induction of labor, augmentation of labor – in the hands of trained staff, or by untrained providers (which is common in some settings) – should be counteracted. Again, this is important for both community, family, the woman herself, and health staff to be aware of.

The World Health Organization (WHO) hosted an expert consultation on PPH bundles in December 2017, where a consensus was found that every port partum hemorrhage should be treated rapidly by four interventions: uterine massage, uterotonics, IV fluids (crystalloids) and tranexamic acid. For PPH that is refractory to these four interventions, these interventions should also include aorta compression, bimanual uterine compression, uterine balloon tamponade (UBT), and apply NASG.

Treatment of PPH — WHO Recommendations

In three separate guidelines from 2012, 2017 and 2018, WHO recommends the following evidence-based interventions for treatment of PPH:

WHO also recommends the use of formal protocols for prevention, treatment and referral of PPH mothers, simulation training, and monitoring of the use of uterotonics.

When a mother suddenly starts to bleed profusely after childbirth, it is important to act immediately and do the right things.

The recommendations issued by WHO above, on the treatment of PPH, are based on the assessment of single treatment methods. Rarely does WHO inform about all the things health workers should do when a new mother is bleeding heavily, and in what sequence. We have to do a number of things at once, actually, and some more as a second effort if she continues to bleed.

The two programs both recommend the following:

Please note that all the above can be done at primary health care level and does not require hospital care.

What are the differences between the HMS-BABC and PPHEC programs?

They are very similar.

The first one, HMS-BABC, gives somewhat more guidance on health-worker training, while the second one, PPHEC, gives more guidance on how to systematically strengthen the health system to deliver improved care of women with PPH.

For a full list of the available training materials, please see the Jhpiego resources section. The short summaries of the HMS-BABC and the PPHEC programs can be seen here.